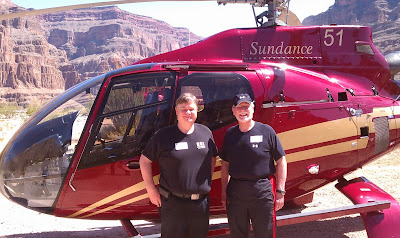 My dad (that is Grandpa to a lot of you) and I had been talking about going to the Grand Canyon for years now. The original plan was to ride mules to the bottom, but that plan really never worked out. My dad called me earlier in the year to ask "When are we going?" I decided at that moment this was the year to go, so I made all of the arrangements.
I started by driving down to Southern California, and spending the weekend with my friends from school. We had a fantastic time. We did not normal Pizza gathering. This is nice, because the group is small enough that we can all talk to each other. I enjoy the regulars such as Gumby, Eric Schubel and Cobos and others, yet each time there are people who have never come before. In this case, Steve Brady was one of the people I grew up with, play little league baseball, swam and played water polo. I had not seen him since high school. We also had a couple of others that had not attended before including some from the class of 1975 (Debora Coffey) and even someone from Royal Oak! 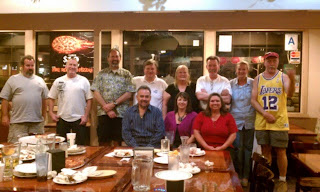 Beside the pizza gathering I managed to visit the Renaissance Faire and even a birthday party for someone I did not know. There Gary Dahle's wife, Judy was performing. How cool was that? Did you know that Cobos could juggle? Now you do!
Monday, I drove up to Las Vegas and Checked into the Golden Nugget. It is the longest running four diamond casino resort in Las Vegas. It is in the older downtown section, but what a beautiful place and what a great value. I love the pool with a slide that goes through a shark tank!
I picked my dad up from the airport and we enjoyed a nice dinner and went to bed. The next morning, we were off on a helicopter trip to the Grand Canyon. My dad knew about this, but what he did not know was that we would be picked up in a stretch limo. First Class all the way! 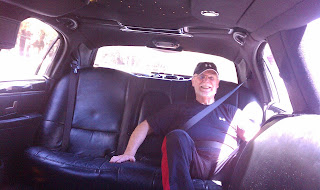 The Helicopter tour of the Grand Canyon is pricey, but worth it. These memories are ones that we will cherish forever. I had never been on a helicopter before and my dad was only on one in the military. He said this was a much nicer ride. We flew over Hoover Dam, and saw where the Colorado River emptied into Lake Mead. The water from the river is very muddy and the lake is blue. Where the two come together is beautiful. 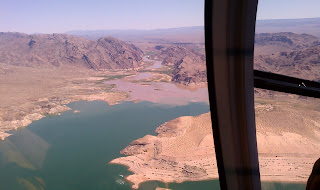 The tour covers the West Rim and while I have been to the Grand Canyon before, it has always been at the South Rim. I was not expecting too much. I knew that the Grand Canyon was a national park and therefore protected. What I did not realize was that parts were owned by Native American tribes and that the tour company had business arrangements that allowed us to fly over, into and land in the Grand Canyon.
It was amazing. We landed and they served us a Champagne Brunch. I was not expecting more than a snack and my dad had no idea at all. The brunch was served in individual picnic baskets. I wish I had taken a picture. Imagine two Bears and they give them picnic baskets! LOL
I knew we would land, but I figured it would not really be in the Canyon. It would be on some private property close by, but no, we were inside looking up at the canyon walls and the river was not far below us. 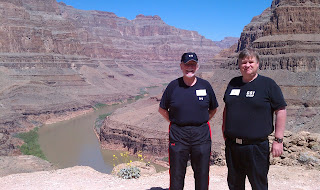 Before too long, it was time to return, we took a different, but equally stunning route back to the airport that included flying over the length of the Las Vegas strip. On way back in the limo, we say Batman! 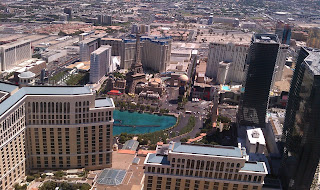 Back at the resort, we went swimming and yes, my 72 year old dad went down the three story slide though the shark tank. What a fun place!
My dad treated me to dinner "The Steak House" in Circus Circus. Who knew that something that elegant and delicious would be hidden in Circus Circus? Well, my dad did. Best steak dinner ever! 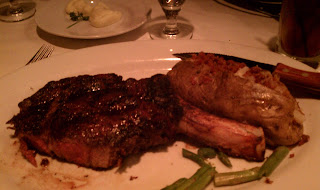 We finished off the evening with the Penn & Teller show. Next to the Beatles Love show at the Mirage, this is my absolute favorite show in Las Vegas.
The next morning, we drove from Las Vegas, across the new bridge over Hoover Dam, around the West Rim of the Grand Canyon to Flagstaff Arizona. We stayed a nice enough hotel, it was a 2.5 star property. After we checked in, we checked out the meteor crater. That evening we went to Black Bart's for dinner. That was my surprise to my dad for dinner, that night. What is so special about this place is that besides having great food, the waiters and waitresses get up and sing and dance like in the old western movies! 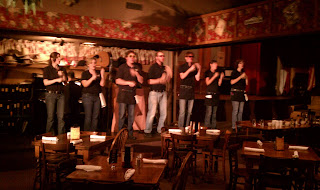 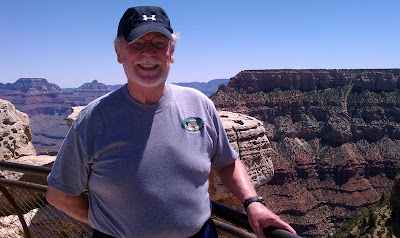 While at the South Rim, we enjoyed a number of different vistas, and had a couple of close up encounters with Mule Deer. They did not seem to be afraid of us at all. This perhaps because they have rangers armed with guns protecting them. These animals are truly beautiful and the South Rim is Magnificent. 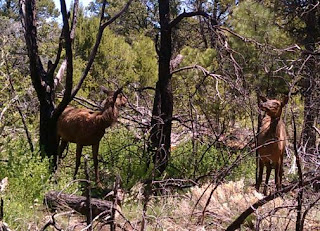 We finished the day by driving back to California and spending the night of Cinco de Mayo at the Americas Best Value Inn of Blythe California. I was very pleased at our accommodations and found their website for booking reservations to be very easy to use and helpful. I chose Blythe because we did not want to drive too far on any one day.
Friday morning we are up bright and early. After breakfast we head off to Indio, California. Date capital the USA and stopped at Shields to enjoy some dates, pick up a Mothers Day present for my mom and get some dates to bring to the friends we were about to visit.
The Millers live in Palm Springs. My dad had not seen them in close to 35 years, yet when we lived in Southern California we saw them all the time, were in each other houses. We were in Boy Scouts together, along with the Browers who made the drive to Palm Springs. All of these people are like family to us and it is a shame that we allowed so many years to pass without seeing each other. We did however try to make up for lost time. The Miller's are such great hosts. That soup was delicious. We enjoyed our afternoon with them and the Browers talking about old times. 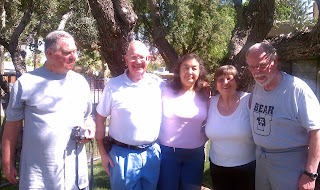 From there, we managed to cross the LA basin without too much traffic to have dinner with my brother David in Sherman Oaks. It was good to see Dave. Dave works in the film industry. Since he lives so far, we don't get to see him as often as we would like. We need to take a picture next time we visit him. After dinner, we drove through the Grape Vine and spent the night in Buttonwillow.
The next morning, we got up bright and early. Had a McDonalds breakfast in the car while we drove home. It was the only time we stopped at McDonalds. We got home, by noon the day before Mothers Day.
I enjoy spending time with my dad and this trip will provide fond memories for many years.
Posted by Ed Bear at 10:27 PM No comments: