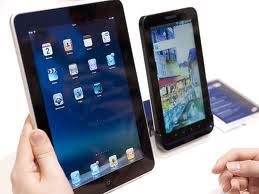 I often get asked, especially by my family, what phone they should get, or what computer. I am waiting for someone to ask me what tablet to get. I wrote this blog entry to try and get ahead of curve for just once.
When selecting a smartphone, one of the most important questions is what network will you be using. Where you are makes a big difference in the coverage you will experience. We live in East Bay portion of the San Francisco Bay Area. In this area the major choices are:
AT&T - I hear a lot of complaints from people on this network.
Metro PCS - Cheap, but we had lots of trouble with coverage.
Nextel - Great technology, but not being kept up.
T-Mobile - Lots of complaints
Sprint - Great coverage
Verizon - Great coverage
I have the EVO 4G. About a year and a half after it was released, it is still one of the most powerful phones out there. It uses the Sprint network, which means that my data plan is truly unlimited. This phone uses the Android operating system and is made by HTC. I would have preferred an American company like Motorola, but one was not available without changing networks, which can be a real pain. The Evo 4g is a great phone. Verizon has an equvilant phones such as the Thunderbolt or Droid Incredible 2.
The android phones are high powered, but not nearly as intuitive as the iphone. If you are a novice, but want a cool phone, pick the iphone via Sprint or Verizon. All the people that work for me and have iphones with At&t do nothing but complain about their service.
Here are things reasons I like my Evo 4G over the iphone:
I have had 4G right from the start and the slowest my phone goes is 3G.
I can replace my battery and buy an after market battery to increase the amount of time between charges.
I don't have to use itunes.
I can run flash.
I can upgrade the amount of storage space I have anytime I like.
Lately I have been thinking a lot about tablets. I use an ASUS netbook. Asus is the company credited with inventing the concept of a netbook. It is basically a small laptop, with no DVD/CD drive. The Asus has a solid state hard drive, which makes it more durable and uses less power. Because it is so small it will run on battery power for over five hours and it fits easily, in my backpack and is easy to operate in tight spots like the middle seat of an airplane.
Small size and long battery life are qualities that tablets are known for. I find that wow my Evo 4G has one of the largest screens on the market (4.3 inches), I am 50 years old and find it is often still too small.
I want something larger, but I want it to be my phone too. I want it to fit into a shoulder harness so that it is out of the way, but easily accessible. A belt holster just won't do with a tablet.
There are two camps when it comes to tablets: the Ipad and Android tablets such as the Motorola Xoom and the Samsung Galaxy.
Currently the ipad has over 70% percent of the market. They must be doing something really right and it is difficult to overlook this. The battery life is amazing compared to the Android tablets. The ipad is one beautiful machine. Still, the ipad has many of the limitations that the iphone does such as having to use itunes, it can't run Flash and you can't upgrade the amount of storage ...etc.
Tablets come in two flavors: Wireless only and wireless plus a cell account such as Verizon running 3G. The difference means additional cost upfront, plus an ongoing cost just for using the tablet. Wireless only means it will only work when you are somewhere with wireless access unless you have what you want loaded on the tablet and that gets back to storage.
Some people say the ipad is too big and too heavy, but I'm not so sure. The older I get, the worse my eyes are, I start to think that it can never be too big.
Still it is a pain that when you want to type that you loose half of the screen. If I carry a tablet, do I still need to carry around my netbook? If so, what is the point and why do I still want one? I want one that I can make phone calls with. I want to replace my smartphone and my laptop with one device.
I should mention that the HP Web OS (Palm) is really great software, but I have the feeling that it is too little, too late.
Microsoft gets a lot of praise for their Windows Phone 7, but they just don't have market share. Windows 7 is available on some tablets, in fact I have an ASUS tablet running Windows 7. I use it only for work. It doesn't need a wireless or 3G (4G) connection. Again Windows does not have a significant share of the tablet market, but you can never count Microsoft out.
The above are just my opinions.
Posted by Ed Bear at 7:45 PM No comments: