June has been a month of travel. Ceci went on a road trip with her friend to Disneyland. She got a very good deal where she could stay for five days at the cost of three. I told her to go ahead. I remember how special Disneyland is when you are young. Unfortunately this meant that she would arrive home in the evening on the same day that I flew out for Chicago and then Orlando. It is the first time that I have been away from Ceci for that long (three weeks).

Carmen and I headed to Chicago via Southwest airlines. I think it is the first direct flight I have had this year and I was glad to have it. We flew out with Scott and Erika Williford. Our flight left very early, but it arrived early in Chicago, so after we checked in, we all headed over to Hot Doug's for Chicago's best hot dogs. Bon Appetite magazine rated Hot Doug's as one of the top 50 restaurants on the planet. Anthony Bourdain admitted that it was better than any hot dog he had eaten in New York.

We were lucky, when we arrived there was no line. They played only Beatles music while there and we had the classic Chicago Red Hot for less than $2.00 each. Scott had the polish sausage and o one went for the rattle snake sausage. These hot dogs are amazing.

Later that evening, Scott and I attended a reception for AAHOA. After all, we were there to work and our families were there to vacation. The next morning was work for us, but Lila flew out on her own to join us. She had to stay one more day for school. That evening we visited a Chicago Classic, Gino's East. The line went around the building, but it was worth it. Chicago deep dish pizza was so filling we could only eat one piece each. We did save room for the cannelloni which we shared. Such great food!

That day was Scott and Erika's anniversary, and they took off to the Hancock building and a romantic dinner and from all accounts it was a perfect evening for them.

The ladies enjoyed Chicago, and the men worked. There was a terrible storm and when we all arrived at the Silver Palm, another Anthony Bourdain suggestion, we found they had no electricity.

Next day after work, we went to the Silver Palm where I had a Schlitz Beer and Carmen and I split the "Three Little Pigs" sandwich, this sandwich contains bacon, egg, ham and a deep fried pork loin. The dining room was a converted 1941 railroad dining car.

We all hooked up with some friends at the Second City Comedy Club, which has been open for over fifty years and has an amazing list of alumni including the original Saturday Night Live - Not Ready for Prime Time Players. Scott had been good enough to book the reservations and it was probably the highlight of the trip. 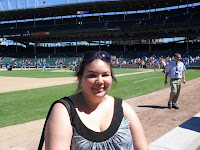 The final day before departure, Lila and I went to see the Chicago Cubs play the Anaheim (ok Los Angeles) Angels. This is true living history. It is very cool that some of the buildings next to the stadium have their own stands. 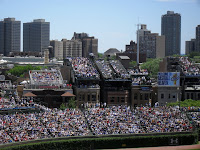 Since Lila had arrived after Hot Dougs, we went and got some hot dogs from here as well as their famous french fries, fried in duck fat which are only served on Friday and Saturday. 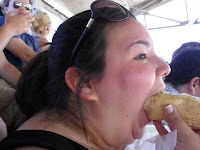 The next day, we all headed to the airport. Lila got up extra early to make her flight. Carmen, Scott and Erika headed back to Oakland while I headed to Orlando for the Hitec show. I am very happy to be home.
Posted by Ed Bear at 9:34 PM No comments: 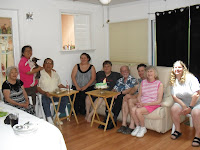 Today is Sunday, June 13th and for most everyone Fathers Day this year is Sunday June 20th. The problem is that Carmen, Lila and myself will be in Chicago catching a plane on the 20th. Carmen and Lila will be flying home and I will be continuing on to Orlando for the Hitec conference, so we decided to hold Fathers Day today.

The entire family was not able to attend. First Ceci had already made plans for a girls trip to Disneyland and it would have been fair to ask her to cancel it. My brother David and my sister Susan and her family could not make it. Still Mom and Dad (or Grandpa and Grandma depending on who you are) were here as well as Becky and even Bob drove up from Morro Bay.

I BBQ'd a classic. Hamburgers and Hot Dogs. We had home made relish, salsa and plum sauce. The plum sauce is excellent on vanilla ice cream.

It was a very hot day today, but we managed to stay cool. I sent an air conditioner with Bob to install at moms house. She still has bees. She may have to call the bee guy out again. Stay tuned for further developments.