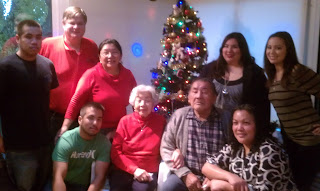 2012 has been quite a year.  This year, we lost a number of  people that were near and dear to our hearts.  First was Vicki Hong, who we have known ever since I got started in the hotel industry back in the 1980's.  In fact both of our families got to know each other very well over the years.  She died while shopping for shoes, which is the way she would have wanted it, but she died way to young.

Father Larry was one of the original priests at our church when we first moved to El Sobrante.  He was Irish and had a wonderful wit.  Both of my daughters served with him when they were alter-servers.  This kind soul is now resting in heaven.

Probably the most difficult passing, was the passing away of Jamito Smith.  I had known his since he was a boy.  I had worked briefly with his dad at the Hotel Durant back in 1980 -81.  Jamito's dad passed away way too young and when he did, Jamito stepped up to the plate as the man of the house and the leader of his extended family.  Jamito was married less than a year when he passed away of cancer, a terrible disease that Jamito fought tooth and nail each day of the last few years of his life.  Jamito is part of a very large family, who all loved and respected him.  He was a gentle giant and is dearly missed.  He was far too young. He never made it to 40.

Just when you thought that enough, was enough, Lee O. Fisher died.  He died while working as a surveyor, a job which he loved.  Mr. Fisher was a very special man to many of us around my age who were in Boy Scouts.  We all benefited by his participation.  I can't remember him missing a camping trip, even though no one was busier, Mr Fisher always had time.  He was the father of a real life Brady Bunch.  It turns out you never really know someone until it is too late.  Mr Fisher was a true hero and accepted all as his own.  There was quite a turn out at his service, even though it was during the week. Lee Fisher will not soon be forgotten.

Fortunately, the entire year did was not filled with death and sadness.  A major branch of our family managed to find us.  We all are direct descendants of my Great, Great Grandfather John Bear.  Leona Bear and Henry Alfred Bear were brother and sister.  Many years ago, these two branches of the family lost track of each other, but this year, we were once again united thanks to my cousin Nick! I have had the pleasure of meeting a number of descendants of Leona Bear, including Larry who lives pretty close by and I am proud to call each and every one of them family.

This year, I got to play in the COHS alumni water polo match.  This was the third match that I've had the pleasure of participating in.  I consider each match a blessing.

I got to spend a lot of time with friends from school during my visits to Southern California; but once again, death struck and we lost classmate Bob Davila.  I knew Bob from swimming and water polo.  I have only seen him a couple of times after 35 years, but each time he was very kind of complimentary to me.  I enjoyed watching him play bass guitar.  He was really good.

I am grateful for everything I have, especially my family and friends and I have my health.  The picture at the top of this blog entry includes my in-laws, who live with us as well as my wife and two daughters.  We are especially fortunate this year to have my two nephews and sister-in-law who all immigrated to the USA about 9 years ago.  Both nephews serve in the US Air Force.  They were not born Americans, they chose to become Americans and serve in our armed forces.  They came here legally.

I realize just how lucky I am, because I have the best friends and family in the world and the rest of you are stuck with me!

Wishing all of you a very Merry Christmas and a Happy New Year!