The Bears go to Washington DC 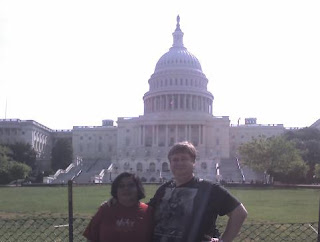 My company, AutoClerk, participates in the Asian American Hotel Owners Association (AAHOA) annual conference each year. This year it was in Washington DC, actually a place called National Harbor which is close enough.

Carmen decided to take some time off from work to so she could go with me. We recorded the Washington DC edition of Anthony Bourdain's "No Reservations" and watched it several times. 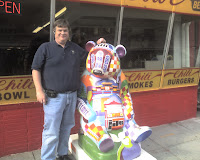 The AAHOA conference was held at the Gaylord. I think it is one of the best conference centers we have shown at. Everything was close and the access was very easy. The only event I had to attend the first day was a reception in the evening, so we decided to visit the International Spy Museum and try Ben's Chile Bowl, a historic landmark of a restaurant that we saw on "No Reservations" and had a "Half Smoke" with mustard and onions. It was delicious. They have a sign that says "Who eats here for free". It listed Bill Cosby and the Obama family. Under Obama, it said "and he paid anyway". 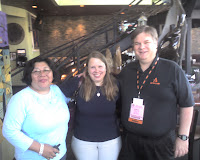 I recalled that my 3rd cousin Amelia Ames lives there, so left her a message and she was good enough to meet with us for breakfast. She drove from her place to the Best Western Pentagon, in Arlington, VA. When she arrived, I asked if she had ever heard of "Busboys and Poets". It is a breakfast place I saw on "No Reservations". She laughed and said "That's where I live". Sure enough, she actually lives on that block. So we all piled into her car and had a wonderful breakfast. During our chat, Amelia mentioned that her parents (my second cousins once removed), we arriving that evening. They were driving all the way down from Cambridge. I told her to call me if they wanted to get together.

After the first evening of the conference, we found that El Polio Rico was just 2.8 miles from our hotel. Not only was this on Anthony Bourdain's list of restaurants in DC, but it is a Peruvian restaurant that specializes in broasted chicken. One surprise is that they served Diet Inca Kola. For those of you that don't know this, my wife Carmen is from Peru. Peru is the only country in the Americas where Coke or Pepsi is not the number one soft drink and while we have been able to find it in hispanic super markets near our house, this is the first time we have been able to find the diet version of this beverage, which happens to be my choice of soft drinks. I can't wait to see if our local market can get Diet Inca Kola. 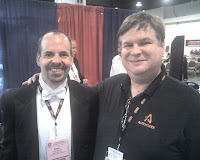 After the second day of the AAHOA conference, a friend of mine, Frank Melville of Phone Suites
invited us to dinner at a place called G&M just outside of Baltimore near the airport. The place was a "Hole in the Wall", but when we arrived not only was the parking lot full, but cars were parked along the street. There was a very good reason for this. They serve the best crab cakes I have ever heard. Each crab cake contains a full 8 ounces of crab meat and very little in the way of binder. My God they were good!

Carmen took a day to explore DC on her own. I booked a tour for us, Scott my Director of Sales, and some good friends from Americas Best Value Inn, an economy hotel chain. That evening we decided to go Chadwicks, again a restaurant that was on "No Reservations". It isn't known for its cuisine, but because it was a popular locations for spys. The show indicated that they served a decent burger, but I saw they had Fish and Chips as one of their specials. I asked our waitress, wich one I should go with and she said "The Fish and Chips for sure". All I can say is in the words of the Comic Book Guy... "Worst Fish and Chips Ever". 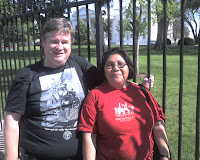 We had most of the day off and it was time to take a tour of DC. We all piled on the tour bus and had a fantastic day. We stopped at the Jefferson memorial, the Capitol building, Lincoln and the World War II memorial where I had the good fortune to meet and shake the hand of Bob Dole.

We then proceeded to the Washington, FDR, Korean and Vietnam Memorial. It was my first time to the Vietnam Wall and I must say it was very moving. We continued on to the Marines memorial next to Arlington National Cemetery, the Airforce Memorial and finished the day at the White House. I think I could see Obama peeking out of the window to see us. During the trip, our tour guide tested us with historical trivia. I am very proud to say that he did not stump me even once!

During the tour, I got a call from my 3rd cousin Amelia asking if we could meet her and her parents for dinner. While we were exhausted, I'm glad we did. Somehow we got a second wind and met them at Clyde's of Gallery Place. Amelia presented Carmen with a shawl that her husband Andy had sent from Afghanistan. He is an engineer in the Navy and we thank him for his service. All three ladies, Amelia, Sally and Carmen wore their shawls. We had a lovely time. They are such wonderful people.

The next morning we caught our plane back to the bay area and while we had a great time, it was nice to get back home.
Posted by Ed Bear at 5:52 PM No comments: 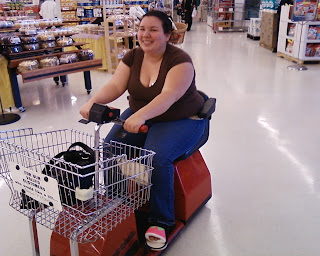 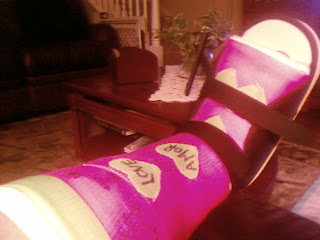 so tuesday april 21, 2009 i dropped my parents (carmen & ed) off at the airport for washington d.c. wednesday april 22,2009 at 5pm i broke my foot. here are the pics of the cast, it's hot pink with bright green hearts on it. i got to use the go cart in the super market which was cool. i did a few laps around frozen foods while my friend jackie looked for some items. people are really great and i thank god for sending me my angels. the cast should be coming off after four weeks which will be one day before my graduation. by the way, i won't have tickets for everyone to attend so i do apologize if i don't have enough. i'm working on putting together a little party or something to celebrate so that every one can attend. i'll keep you all posted. hope everyone is well. take care and god bless. =)