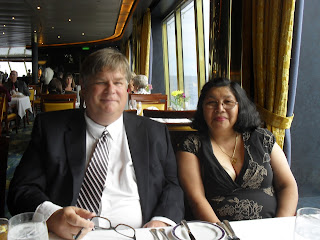 Day 1 (Saturday)  We flew from Oakland at 9am to Seattle.  For the first time on a vacation for us, we did not have to get up at 4am and go to San Francisco.  We arrived into Seattle, and took the hotel's shuttle to the hotel.  We Stayed at the Best Western Executel near the airport.  I thought for sure that we would have to check out luggage, so I told the clerk that we were there for our 30th anniversary.  We were able to go right to our room!

I had made reservations for a dining tour.  We took the light rail to Pikes Market.  The tour consists of visiting 6 different restaurants.  Walking to each one, while our tour guide tells us the history of the area.  You definitely walk off anything you eat.  We first discovered this type of tour when we went to Puerto Rico last year.  One exciting thing did happen.   We were at the place where they throw the first, enjoying smoked salmon.  I was right next to the guy who was catching the fish.  I noticed with each throw it was getting closer and closer to me, but I decided not to move.  Yep, I got smacked with the fish.  Right in the face.  It didn't hurt, but the guy was so worried that he had hurt me.  When we returned to our hotel room, there was a card wishing us a happy anniversary signed by the individual staff members. 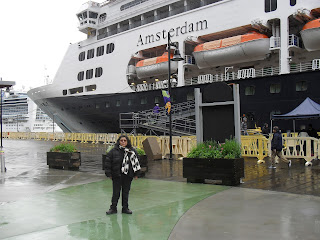 Day 2 (Sunday) We take the shuttle to the cruise ship.  The process of getting on went a lot quicker than I had expected.  We took Holland America.  The only other cruise we had been on was with Carnival and that ship was huge.  It was like a city.  Our ship held less than 1,300 people.  It was much more intimate, which we liked.  It was more like a town, and we got to know people.

I am prone to sea sickness, so we started taking sea sick pills right away.  This meant that we slept more than we wanted and missed a few events that we would liked to have attended.  One of the very first things we did was take a tour of the ship.  I recommend this to anyone who takes a cruise.  It saves a lot of time not getting lost.  The ship was beautiful and funny enough, our room was very large, though the beds were not.  The food was great, the crew was great and the views were amazing. 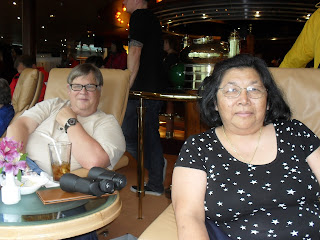 We woke up really early by chance on the day that we visited the glaciers, so we went up to the crows nest and sat in the two lounge chairs that are right in front.  We stayed there most of the day, till we arrived at the glaciers, when the opened the bow for us so we could go outside and get an amazing view.  The place was called Tracy Arm.  There were so many icebergs, so many animals, whales, sea lions, dolphins, bald eagles ...etc.  The ice was so blue, absolutely beautiful. 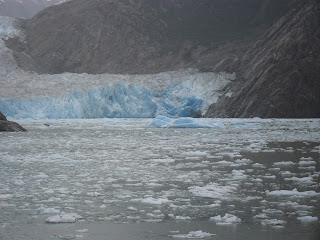 Our first port of call was Juneau.  There we had two major excursions:  The first was the dog sled camp.  You could ride a sled in the snow, but it requires a helicopter ride to the top of a glacier.  This is a lot more expensive and my wife is afraid of helicopters.  At the camp, the sleds are on wheels, but the dogs are the same.  We got to meet one of the mushers that will be in the Ididitarod next year.  We got to check out the gear and play with the puppies.  They were so cute and we had a great time. 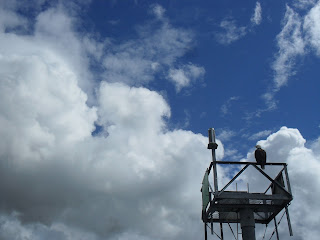 Next we went on a whale watching tour.  We saw lots of hump back whales, and bald eagles.  The problem is that I tried to take pictures, but whales are quick and the boat was rocking.  I only got a few pictures, and they weren't that great. 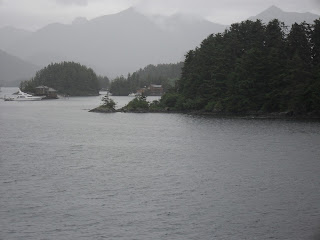 The second port of call was Sitka.  There is port at Sitka, so they ferry us in on small boats to the small dock.  It is a beautiful place with islands all over the place. 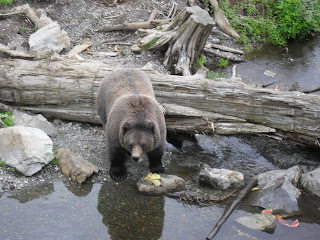 From there we took the local shuttle to visit the Bear Fortress.  This is where the rehabilitate bear cubs that loose their mom.  Interesting that Alaska is one of the few states that shoot bear cubs that loose their mom.  The Bear Fortress is a non-profit organization.  They are going great work, and the space they have is 17 times the average amount of space a bear would have at a zoo.  All of the bears seem so happy, so playful. 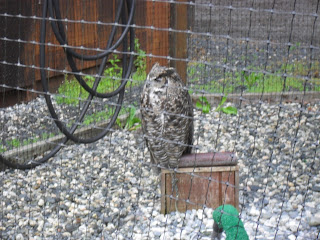 From there, we visited the Raptor Center where they help injured Eagles, Hawks, Falcons, Owls ...etc.  Again, they do great work.  Those birds are amazing. 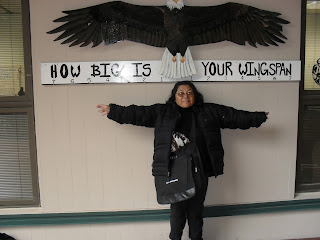 The next port of call was Ketichan.  There we bought a few souvenirs and we waited until all of the tours left.  There is an office there, where all of the tour companies have a counter.  I negotiated a really good price for us.  We were going to be there last customers of the day.   We ended up getting a private tour.  I explained that we really did not care about the stops they normally make, we wanted to see a bear in the wild.  Util then, I had never seen a bear in the wild.  It is on my bucket list and one of the things I felt entitled to.

Our tour guide brought us to a place she new where the fishery was and she showed us where to look.  During that time, she was looking around trying to find a bear.  Next thing you know, she comes over to us, white as a sheep.  While looking behind us, a bear came out to cross the road.  Apparently both our guide and the bear were very surprised.  So, our guide tells us where the bear will come out.  This time, I decided not to try and take pictures, just enjoy the view.  Sure enough, the bear appeared and we watched it cross the meadow, taking its time.  We watched till it dissipated from view.  It was magic. 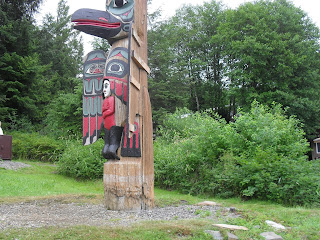 We went and looked at the totem poles before returning to the ship.

The last port of call was in Victoria, BC.  Here we took the bus into the downtown.  Where we checked out the Empress Hotel. Wow, amazing.  After, we walked out of the tourist area and went to a Tim Hortons, which is a famous doughnut shop franchise.  My family loves their coffee, so we bought some.  Then we went to a regular grocery store and bought some bottles of maple syrup.  We love real maple syrup and they sell it in these beautiful bottles for so much less that we pay in California.

The final day, we returned to Seattle.  It was great because we were able to check our bags in on the ship and get our boarding passes.  We flew home and spent one day recovering before going back to work.

It was a Happy 30th Anniversary. 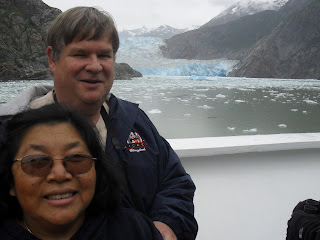 What a lovely anniversary celebration! We went on the same cruise, same company. I loved Sitka more than all, but each place was amazing. Such wonderful adventures you had :)