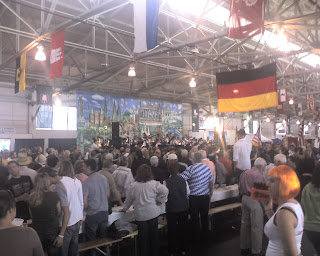 Carmen and I decided to attend the Octoberfest at Fort Mason in San Francisco.  It was great.  I thought about bringing one of my beer steins.  I have a small, but nice collection that I purchased when Carmen and I went to Germany about 15 years ago.  While we were in Bavaria, where Munich is, we did not make it to Munich and since we were there in January, Octoberfest was not going on.  The good part of that is that it was not crowded.  That is probably the closest we have come to a real Octoberfest. 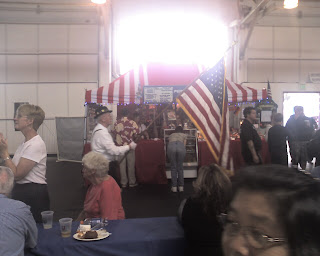 In 1978, my family moved from Southern California to Pleasant Hill.  That October, my dad brought us to an Octoberfest celebration that was held in Marin county.  It was great, but I was not old enough to enjoy the beer. 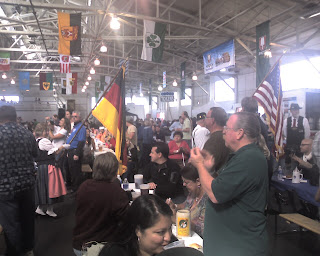 In 1977 while in High School, a bunch of us including Eric Schubel went to an Octoberfest celebration in Anaheim.  While we could not enjoy the beer, that was where I first learned to enjoy German food. 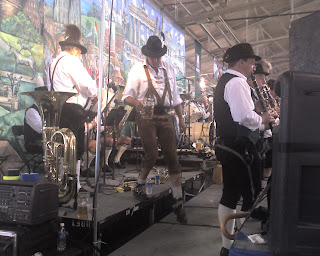 This Octoberfest 2008 in San Francisco was wonderful.  People were allowed to bring their steins and you can bet that I will bring one of mine next year.  We got their early and got the second to last free parking spots.  Always a nice feeling.  We enjoyed beer sold by the leiter, knockwurst, roll (brochen), potato salad (kartafel salad) and apple strudel. 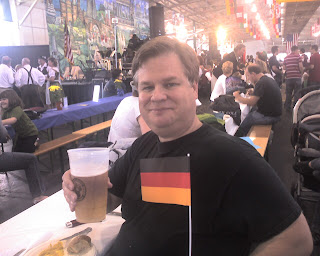 It is the 60th anniversay of the Berlin Airlift.  For almost one year, East Germany (with Soviet backing), closed all land routes from West Germany to Berlin.  The Untied States, in one of the great humantarian efforts of all time, flew supplies around the clock until East Germany gave in and opened the land routes. We enjoyed the booths, food, beer, costumes and especially the live music.  We got their early enough to have great seats.  I can't wait until next year.
Posted by Ed Bear at 10:22 PM