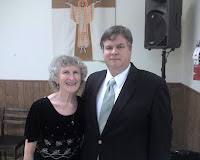 My mom called me and asked if I would like to go to the church's service appreciation dinner. I said "I would not LIKE to go, but I will". LOL I go to so many banquets for work, but I love my mom, so I guess I'm going.

Mom is a Eucharistic Minister and is a member of a ministry. I think it has to do with Father Serra, which I really don't know anything about. So I'm off to the dinner, which my daughter Lila would really have liked to have gone to, instead of me. I felt the same way. She just joined a couple of ministries, the choir being one of them. I think the choir is a ministry.

Anyway, my mom meets me at the church. I think she was probably an hour early and wants to be the last to leave. After all, there will be dancing tonight. My mom warns me that it is a semi formal event, so I have my suit and tie on.

When I arrive, I notice that there are two key people that seemed to be responsible for putting on the dinner. Both are members of the Knights of Columbus and are in their mid to early twenties. One is a friend of Lila's, his name is Ugoeze Ofoegbu. He is not African American, he is actually African. His dad is a tribal chief in Nigeria.

I am right on time, yet my mom has been there for a while. I give her a hug and sit down. Naturally being the proud mom she is, she has to introduce me to all of her friends. It is at this point that I notice that even though I am going to be 50 next year, I'm one of the youngest people at the dinner.

There are a number of speeches, singing and prayers followed by dinner. Dinner was actually pretty good. After dinner there are awards, followed by more speeches, prayers ...etc. After they get everyone that received an award, they announce that they are to be honored with their spouses to have the first dance. I'm thinking it will be a waltz or something. After all, the average age looks to be about 75. I was wrong.

The music starts and the first dance is to be "Celebration" by "Kool & the Gang". Now this is definitely not a "Disco Era" gang by any stretch of the imagination. Ugoeze is the one that gave instructions about the music. He was born in the mid 80's so to him, the 70's is old music. After all it was before he was even born. To him that is old, but these people were already old in the 1970's.

The old folks don't shy away. Maybe they should have, but they didn't. It was not a pretty sight and even Father Jimmy, Sister Angela and Father Nick got up and danced together. I managed to get a video of this if they ever give me any problems. Seeing these people dance like this will require some therapy on my part, but I am sure I will recover. I will say that they should probably think twice about serving wine next time.

I danced a number of times with my mom and she danced with a number of old guys. I don't know them, but they are old guys. She said I was a good sport, so I guess I did my duty.

I almost forgot to mention. Everyone got to keep their wine glass. On one side was an etching of the church, the other side had the date of the event. My mom had to snag a second glass. I knew she would. 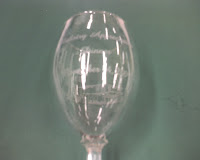