Today I went to the Green Festival in San Francisco. My daughter, Lila, took me to the El Cerrito del Norte station in our Ford Escape Hybrid. I got off at the Civic Center Bart Station and walked to 8th and Brannon. It is just under a mile each way and I was working my hiking boots. This is important cause this is the longest walk I have done since I sprained my ankle. I really felt it on the way back.

It seems over the last year, that there are less conferences, expos ... etc. that focus on being green. There is the local Earth Day event in Richmond, but there were a lot more a year or so ago. I think they are important. It is a great way to get educated and inspired. I learn a lot every time and it makes me want to do better.

This year you could bring five cans of food instead of paying the $15 entry fee. I would have done that, but they did not post it on their web site. Last year it was three cans. You don't save any money, but it sure does some people a lot of good. Paying by donating canned food is my favorite method of payment. I still didn't have to pay $15, I got a five dollar discount for taking BART.

There were Circus Soleil performers out front while we waited in line to buy our tickets. That was a special treat. I wanted to get a short video, but I didn't want to loose my place in line.

One of the booths calculate how much impact your trip to the festival is and how much it would cost to offset using carbon credits. Since most of my trip was via BART, they calculated heavy rail. It came out to 3o cents. Just for fun, they calcualated what it would have been if I had driven. Funny enough, it was actually worse for me to take BART than drive. So then they decided to try and recalculate using the commuter train setting. It still would have been better to have driven the Ford Escape Hyrbid. Strange when you take into consideration that they gave me a $5 dollar discount for taking BART instead of driving. I don't know if the program was right, but it makes one think.

It was a full festival. Many drawings for prizes and I entered all of them. Hope I win. The samples were plentiful, wonderful food (chocolate is a food, right), fruits, drinks and more. 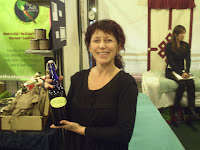 Here is one of the new technologies and space savers is this toilet/sink combination. I want one! 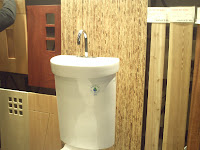 One of my favorite things was a lady wearing bags, to show how much goes into landfill for every person that shops every year. I thought it illustrated the point very well. 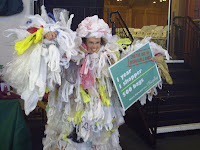 Some of my favorite companies are Green Zebra and Zip Car. They were there in force and I made a point of stopping by.

Saw my friends at 3prong. They have moved from their location on San Pablo Road inside the Green Motors facility. They are now on fourth street.

One thing that I noticed was just how nice and polite everyone was. It really makes a different and helps to put a smile on your face.

After I had made the rounds to each booth, I stopped to have lunch. In the ultimate green, I brought my own lunch in a thermos. I used a bandanna for a napkin, a spoon from home and a bottle of water and I was set. I did not stay for the live music. No one from my family was able to go with me and regardless of how nice it was, it is not the same when you are alone. Maybe next year!
Posted by Ed Bear at 9:36 PM

Could you give any more info about the sink/toilet combo? Do you know the manufacturer or where they are sold?