Today Carmen, Lila, Kike and myself went to see Avatar. Normally I wouldn't write about seeing a movie in our blog, but there were some special circumstances that made this memorable. We had just laid to rest Uncle Don only the day before yesterday and it was good for us to do something to take our minds off of this loss and start to get back to normal.

I had a lot of doubts about this movie. I had heard mixed reviews from friends. I am not an incredible fan of James Cameron. I have found his movies, such as Titanic, to go on way too long. One friend compared it to Lord of the Rings, which I found totally boring despite many attempts to like this series of films.

I had decided that if we were going to see Avatar, we would see it on the Imax in 3D. I looked up the times on Fandango, but did not book the tickets. That was a mistake. The theater is in Dublin, California, which is a good 45 minutes from our house. Once we got there, we found out that they were sold out for the 3D Imax until 10pm, so we decided to watch the movie in 3D, but not on Imax. Next time I want to see something in Imax, I'm going to book my tickets in advance.

We had some time, so we decided to get something to eat at Fuddruckers. Besides beff, they have hamburgers made out of Bison, Ostrich and now Venison. I had to have it. I can now say that I have eaten Bambi.

The theater is the Regal Hacienda Crossings 21 & Imax. The theater was fantastic, the screen was very big, but the most impressive part was that the men's room has waterless urinals. Win one for the Green side! 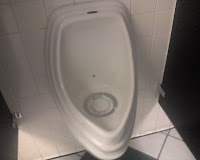 3D can be annoying, this wasn't. Seems 3D technology has come a long way. There were none of the gimmicks in this movie of having things fly right at the audience. This was just a movie that happened to be in 3D and it enhanced the viewing experience. I was worried that Carmen who wears glasses would have difficulties, but that was not the case. How soon before 3D TV's hit the market. 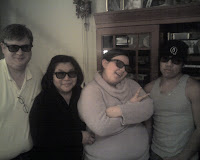 This movie was amazing. I not only enjoyed the visuals, but thought it was a great story. The only movie I have ever enjoyed more was Star Wars when it first came out back in 1977. We all enjoyed this movie, so four thumbs up from the Bears.
Posted by Ed Bear at 8:57 PM