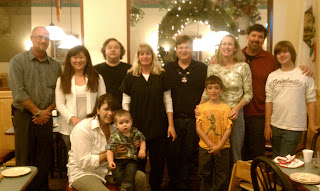 After attending a a biker wedding, I got back just in time to get cleaned up and go to the Roundtable in Ontario, California. I was in Las Vegas the prior week and instead of flying home, I decided to visit my high school friends in Southern California.
The idea is that I post that I am going to be at some pizza place and about 15 people show up and we eat pizza and have a good time going down memory lane. Each time there is some sort of surprise. This time would be no exception.
Debbie Watanabe is someone I never knew. Debbie is David Watanabe's little sister. I never knew he had a sister. Turns out that my little brother David and her were very good friends. In fact they found each other via me on Facebook. So, Debbie says that she is going to come to have pizza with us and that she is going to bring Donald Hoffman! 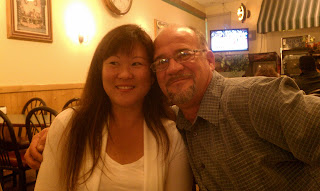 The Hoffman family lived 4 doors down on the corner. Each of the kids names started with the letter "D". There was Deann, Dell, Duane, Donald and Danielle. Donald, now Don and I did everything. We played, fought, laughed, cried, built forts, flew kites, rode bikes and got into trouble whenever possible.
Donald did now know that I knew that we was going to be joining us. I had also looked at his picture on Facebook, so when he popped in, smiled at me and extended his hand for a handshake, I looked in his eyes and said ""Donald Hoffman". He could not believe that I recognized him. I could see "Donald Hoffman" in his eyes, but I confessed that I had been tipped off.
One of the coolest things I remember about Donald, Duane and Dell is that one day, their dad bought Navy surplus bunk beds, that were bolted to the wall. They were three high. When you are a boy, there is nothing cooler!
Back to Debbie, she is as wonderful as she is beautiful. It is hard to imagine her brother David sitting on her so she would not change the channel on the TV. In fact, if we had known how pretty she was, David would have been treated like a king in high school.
Deann Call Lent arrived with her two youngest sons, her husband Tom and her mom! Her mom was so cool, I really enjoy meeting the parents after all these years. It is always special when Deann can attend. She lives so far away and has such a large family, it is amazing that she can fit us in. We are all grateful to the reunions that she does so much work on. Deann has been married three times, but I must say that the in her case, the third time was the charm. Tom is great, and really should be an honorary Lancer. Tom does not get just the customary handshake, Tom gets a great big bear hug.
My brother Dave, who had not responded to my message asking if he would be able to attend showed up about 30 minutes later. That was a great surprise and he and Debbie and Don had a lot to chat about.
Two of my closest friends are Cobos and Judy Zeiter. They were both there. In fact, I can't remember a pizza event they have not attended. Cobos brought Logan, her grandson. I have known him since he was a bulge in his mommy's tummy. He is such a good kid and always manages to steal all the attention. 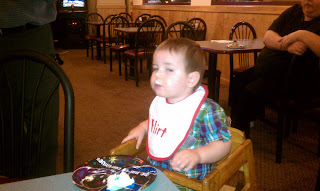 This evening, Cobos and Judy were up to no good! To my surprise, they came ready to celebrate my birthday. What a surprise that was. Gifts, Cake, Cards and all. I keep thinking about Monty Python and the Holy Grail. The old man kept exclaiming "...but I'm not dead yet!". John Cleese would respond, "You aren't fooling anyone!". I wasn't 50 yet, but apparently I wasn't fooling anyone, especially my friends... 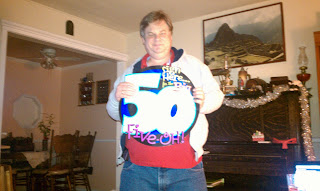 You'll always be 41plus to me!
Karen