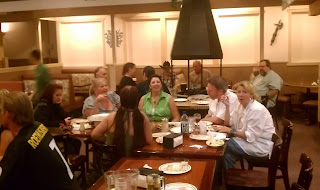 Before I get started about the Pizza Night, our hearts go out to Deann (Call) Lent, her family, friends and neighbors. She lives in Seal Beach. On Wednesday a crazed gunman entered a beauty salon and murdered eight people. Deann's son goes to school with the boy, whose father did the killing and the mother who was one of the murder victims. Deann, our thoughts and prayers are with you and yours.
We have been doing COHS Pizza Nights for a few years now, but this was absolutely one of the best. We had a great turn out including two of our teachers: 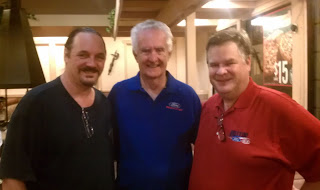 Mr. King was our music teacher in 8th grade at Sunflower Jr. High. He was so cool. He was into racing cars. He dressed more like us than your normal teacher. He introduced many of us to the Beatles for the first time. We explored what kind of music we liked. We did not sit in rows, instead we sat in a circle where everyone could see everyone else. It was so great to talk about music, cars and our times in school with Mr King and he could not have been more gracious. 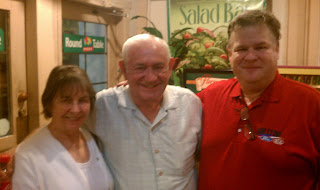 Mr. Hall was my German teacher for all four years at Charter Oak. I was born in Frankfurt Germany. I immigrated to the US when I was only a year old. No one wanted to learn German more than I, yet I had a tough time. On my first vocabulary test I got a "D". This was devastating. I did not give up and Mr. Hall never gave up on me. After high school, I would continue to study German for 3 more years in college. Mr. Hall is actually Dr. Hall. He received his PHD during my senior year. A special thanks to Pam McKovich, who arranged Mr and Mrs Hall to attend our pizza night. It was very special to be able to spend time again with him after so many years.
We had a larger than normal turn out. Not everyone who thought they could make it did, but quite a few did show up who didn't think they could. My brother Dave was able to attend our gathering and it is always nice to see him. We had a number of first timers. I hope they felt welcome as we all share a special bond.
Eric Schubel is normally part of our group of regulars. He was recently in an accident, but after four days, his injuries have not improved. He decided to go to Urgent Care. We wish him a swift and full recovery. Eric says he will be at the alumni water polo match tomorrow. He won't play, but he will be there to cheer us on.
Thank you to everyone who made this such a special evening. 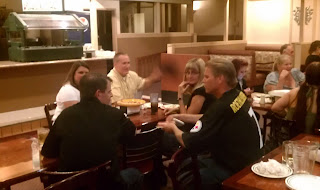