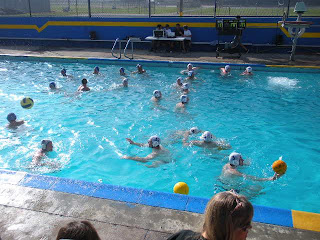 I had to come down to Southern California for work, so I extended my stay by a day so that I could get together with my classmates at our Pizza Night, which was great. For some reason my wife insisted that I stay an extra day and not worry about coming home until Sunday morning. She said that I don't get to visit my friends from school very often.
Friday morning Diana (Cobos) Campbell gives me a ride from Anaheim and we go directly to Charter Oak. I want to know when the alumni match will be. In the office, the lady says that they have not set the date yet, but gives me the phone number to one of the coaches. I call and leave a message on his voice mail. About 10 minutes later, he calls back and explains that the match tomorrow (Saturday) at 10:00am. What a lucky break.
With less than 24hours notice, I get my phone and start calling friends. Cobos calls her brother. I post a notice on Facebook and we put the word out. 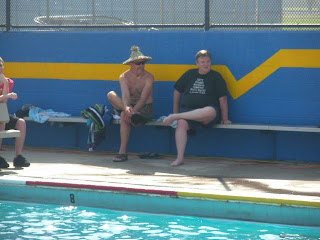 Craig "Gumby" Schaeffer and myself are the only ones this year that can play. Eric Schubel makes it, but it recovering from an injury, so he and his son are there for moral support as well as Inez Schaeffer, Diana (Cobos) Campbell, Pam McKovich and her son Hunter, Steve Brady and others. 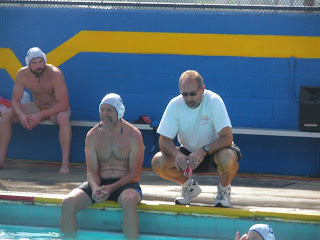 This year things are a bit different. They are charing $10 for alumni to play, which is fine. The money goes to help the water polo team. Craig and I are smarter than we were two years ago. Then, we warmed up rather well. Too well. By the time the game started we were already tired. We had spent too much energy warming up.
Another difference is that instead of one huge alumni team with about 25 substitutes, we are split between those that graduated in this millennium and those of us that graduated in the last millennium. This is a serious concern for us older folks. We are going to have to play a lot more as our team is much smaller.
Both Craig and I started. We like to think that we did no harm. We substituted in and out throughout the game. During one play, I passed the ball to Craig and he scored. Chalk up one for the geezers! At the end of the fourth quarter, it was tied. We played one more period and managed to win the game 21 to 20. That is the same score we won by last time we played, two years ago.
It was a great game. We were all puffing and wheezing, but we pulled it off. Hats off to COHS varsity water polo, especially number 9. We may have won, but they played a full game before they even played us.
See you all next year and hopefully we will have more time to prepare and more Lancers from the 1970's. Maybe coach McNeil will show up, who knows?
Posted by Ed Bear at 4:06 PM