Wedding for a Special Friend 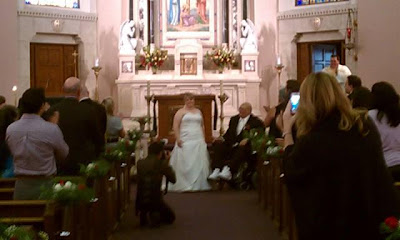 Today Jaime married Autumn and became Mr & Mrs Smith. We were invited to their wedding. I really don't know much about Autumn. The few times I have seen her, she has stayed close to Jamie and taken great care of him. It doesn't matter, because if Jamie has chosen her, then she must be pretty special.
I have known Jaime since he was a small boy. Jamie, his brother Pedro (aka Shuman) and sister Mariemilia are the celebration of two great families, the Smith and Manrique families. When I first met Jaime, he was called Jaimeto. His brother Shuman was still breastfeeding and his sister would not be born for years to come. Jaimeto's father was called Jaime. Jaime was a very generous man. He helped many of family members (both on his side and his wife's) to have a place to live and find a job. Jaime was one of the most generous people I have ever known. He never had a lot, but what he had was yours. Jaime was always the life of the party. He loved to laugh and share that laughter with others. Sadly Jaime left us too early.
Even though Jaime and his wife Rebecca were divorced, Rebecca made sure that all of Jaime's friends and family where with him in his final hours. One thing about this amazing family is that when one falls or needs help, there is always one or more to step forward to offer support, or step in their place to move forward. Rebecca was never the life of the party, but she was always strong and loving. She kept her family moving forward and provided the love and support her children needed, but it didn't stop there. She is one amazing woman. This family is very big and very close. It is made up with many aunts, uncles, cousins, nephews and nieces.
So back to the wedding... Jaime and Autumn got married and there was not one dry eye anywhere. Jaimeto has cancer. He has been battling cancer for some time now. He has been in a wheel chair for years. This is a marriage made of the purest love.
When it came time to speak about the newlyweds, and propose a toast. One family member stepped up to the plate, each to be overwhelmed by the emotion of the moment. First was Jamie's younger brother Shuman. He mention that his brother has had a rough time. He broke down, but immediately, his sister came to him to support him. She expressed her love to the couple. She mentioned how after her father passed away, that it was Jaimeto that stepped into that role for her, but it was too much for her as well and she broke down. Jaimeto took the mic to express his gratitude and love for his friends and family too, but the emotion overwhelmed him as well. Their mother Rebecca took the mic, followed by their grandmother. "This is not a time for tears ...". This family does not know the meaning of defeat, but they do know the meaning of the word "family".
Over thirty years ago, I was first invited to this family's house for Christmas eve. Only two people in this huge family knew me and they did not know me that well but we worked together at a hotel. They brought out a huge bag with one present in for each person, including me. I was shocked. This family took me in to their home and treated me like one of their own. To this day, I feel a special connection with them. They are part of my family. Jaimeto, I am grateful to you and your family in ways you can never know. I love you very much and am grateful that you included us in our wedding. You are a shining example of what family means.
May God bless each and every one of you.
Posted by Ed Bear at 7:32 PM